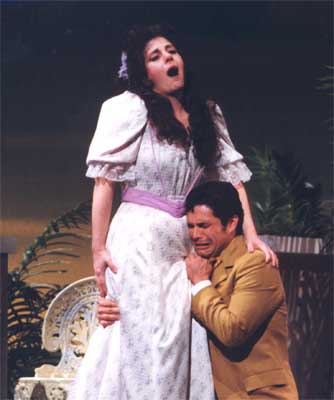 Carol Ann Manzi is a soprano of exceptional versatility and stage presence. Nearly every reviewer has raved about her “gorgeous and crystalline pianissimo singing,” her expressivity, long legato lines, and highly believable interpretations.

In 2018, Ms. Manzi rejoined an esteemed Voice Faculty at Music Acdemy International, the leading summer training program for young international musicians. Most recently Manzi debuted as a stage director, producing and directing Amahl and the Night Visitors (Menotti) for the Salem Performing Arts Academy.  With the Manzi-Heck Duo, she appeared in concert on the prestigious St. Paul Evensong Concert Series in Salem with a program of songs for Advent.  She reprised that concert for Unity of Santa Barbara.

Manzi was the soprano soloist in Nova Rise, the Czech Republic, for a Festival celebrating the musical contributions of Paul Wranitzky (1757-1808), a Moravian classical composer. She sang his rarely heard arias and song literature accompanied by forte-pianist Richard Fuller.

She debuted as guest soloist with the Willamette Master Chorus in a Concert for Life, which honored those with cancer. She sang music commissioned and composed specially for this event. Noted composers included Dave Metzger (Frozen).

She was invited back to perform her critically acclaimed soloist role in Theodorakis’ masterwork, Canto General, with the Santa Barbara Master Chorale and orchestra.

Miss Manzi recently finished a 3-year tenure as the Artist-in-Residence for the Salem Catholic Schools Foundation. She appeared in a gala concert at the historic Elsinore Theatre in downtown Salem, Oregon, with The New Arc Quintet, in a concert of Standards, Broadway, Classical and holiday fare.

Ms. Manzi was engaged by the Santa Barbara Music Club to perform Debussy’s lush Proses Lyriques cycle, accompanied by pianist Betty Oberacker. She sang her first Frauenliebe und -Leben cycle (Schumann) with Dr. Oberacker. She made a return appearance with the Santa Barbara Master Chorale as soloist for the Magnificats and Glorias of Vivaldi and Buxtehude. She joined them again as guest artist for a Holiday Gala Concert. In 2010, she returned to Opera San Luis Obispo as Mimi (La Bohème) after triumphant performances as Cio Cio San in Madama Butterfly.

She was a three-time soloist for the prestigious Jefferson-Jackson National Democratic fund-raisers in Southern California. In Dallas, she debuted with Voices of Change and Voces Intimae performing a variety of art song and vocal chamber music at the Fort Worth Museum of Contemporary Art, under the direction of Maestro Joseph Illick. Also in Dallas, she debuted with the Highlander Concert Series for Aaron Copland’s In the Beginning and Handel’s Messiah (her first as a mezzo soloist).

Previous opera engagements include her return to Alice Tully Hall, Lincoln Center, as Maria in Mascagni’s Guglielmo Ratcliff, opposite MET tenor Lando Bartolini, following a triumphant Vivetta (L’Arlesiana). She has sung Mimi (La Bohème) for the Greensboro, Eugene, Sarasota, Carolina and Pacific Repertory Opera Companies. Her five seasons with the Sarasota Opera have included Magda (La Rondine), Vivetta (L’Arlesiana), Leila (The Pearl Fishers) and Fiora (L’Amore dei Tre Re). Her Cio Cio San (Madama Butterfly) has been heard at Abiline Opera and Opera San Luis Obispo. Her Musetta (La Bohème) has been heard at the Connecticut Opera and The Yale Opera. She has been hailed as a “supple voiced and exquisite” Violetta (La Traviata) for Opera Theatre of Connecticut, Opera Santa Barbara and Eugene Opera.

Other roles to this versatile soprano’s credit have included Fiordiligi (Così Fan Tutte), Nedda (I Pagliacci), Rosalinda (Die Fledermaus), Gilda (Rigoletto), Cendrillon and Tosca for the Shubert Opera, The Conneticut Opera and The Banff Festival.

In concert Miss Manzi has appeared with The Toledo Opera, Opera Maine, The Tanglewood, Banff and Chautauqua Festivals, singing a wide range of repertoire that extends from the classical song to Sondheim. Her many concert and oratorio credits include The Hartford Symphony, The Eugene Symphony, The Rogue Symphony, The Litchfield, Meriden and New Haven Symphonies, performing The Messiah, Elijah, Verdi’s Requiem, Haydn’s Lord Nelson Mass, Mozart’s Coronation Mass, and Mendelsssohn’s A Midsummer Night’s Dream, in addition to opera, operetta and musical theater galas in concert halls worldwide. Manzi has garnered top awards, prizes, and scholarships from the Yale Opera, the McAllister Foundation, Rosa Ponselle and Jenny Lind Competition, the Sarasota, Miami, and Connecticut Opera Companies, UNICO International and the National Federation of Music Clubs.

She is the dedicatee of Reversals (published in 2011), a cycle of songs (The Good Name of War, What is Holy, A day Like Any Other Day) for voice and classic guitar by Thomas Heck to lyrics by poet and peace activist David Krieger. In 2013, she was the dedicatee of a set of contemporary songs for voice and piano by the noted composer Judith Cloud. Carol Ann Manzi’s recordings include SONGS OF COMFORT AND COURAGE, to benefit a variety of cancer causes, LOOK TO THE RAINBOW, and more recently THE MOST BELOVED SONGS OF CHRISTMAS, and SECULAR SONGS FOR SACRED PEOPLE, with classical guitarist Thomas Heck.

The Yale graduate has continued her worldwide public speaking and concerts for breast cancer and other causes, with engagements in Austria, the Czech Republic, Dallas, Canada, Oregon, California, Washington D.C., and other parts of the U.S.